Just like the bingo you might have played in bingo halls and land-based casinos, online bingo is a load of fun. If you’ve never played bingo before, it may seem confusing to you at first, but don’t worry because it’s really easy to play once you’ve got to grips with it. Plus, you could win a nice cash prize or two. Here’s an easy-to-follow guide to that covers all the basics and offers some useful tips for how to play bingo online.

Bingo is a game of chance that involves you marking off numbers on your bingo card as they’re called out. Each card has a random selection of numbers on it. Players win either by completing a line, completing multiple lines or getting a full house (where every number on the card is marked off). Many bingo halls use electronic machines to randomly generate numbers, though before these became commonplace, bingo cages were used. The caller would place all the numbered balls inside a cage and turn the handle; a ball would then drop out of the bottom and its number would be called. For online bingo, the numbers are randomly decided by computer.

The two most common types of bingo you’ll find online are 75-ball bingo and 90-ball bingo. As their names suggest, what sets these two variants apart is the total number of balls that each of them has in play. In 75-ball bingo, players have a 5×5 grid with the central square left empty, for a total of 24 numbers to mark off. Each column is headed by one of the five letters of the word ‘bingo’ and each number can only appear in a certain column, as shown below.

With 75-ball bingo, there are numerous ways of winning. Get a blackout or full house (mark off all 24 numbers) and you’ll win the biggest prize. Other prizes are typically available for marking off all numbers in a vertical, horizontal or diagonal line and for getting two, three or four lines. Some games even have you mark numbers in certain positions on your card to complete a pattern.

The other main version of online bingo you’ll come across is 90-ball bingo. This is the most common of the two main bingo variants. The card is a 3×9 grid with a total of 15 numbers. There are five in each of the three rows, with the 12 remaining spaces left blank. The first player to mark a full row wins the first prize; the second prize goes to whoever marks off all the numbers in two rows and the third prize goes to whoever first marks off all numbers on their card. In each column, only a certain range of numbers can appear; for example the first column is for numbers 1-9, the second for 10-19, the third for 20-29 and so on.

Can you make a career out of online bingo? 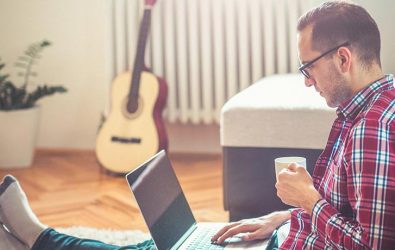 While these are the most common types of online bingo you’ll find, you may come across other versions. If you play 80-ball bingo, you’ll receive a 4×4 card, with each column corresponding to a different colour (red, yellow, blue and silver) and the numbers 1-80 evenly assigned to a column. Numbers 1-20 only appear in the first column, for example. As 80-ball bingo isn’t yet as popular as the other two, prizes aren’t as great. Nonetheless, it can still be fun to play.

Everything done for you

No matter type of online bingo you play, your numbers are marked automatically for you. Even if you’re away from the computer while your card wins, it still counts and you’ll receive a notification letting you know you’ve won. You will find some bingo games that let you mark off your own numbers.

There are countless bingo sites out there, so how do you go about choosing a good one? The most important thing you should do is check to see if the site holds an active gambling license. If it doesn’t, do not sign up and definitely do not hand over any money to the site. If it does have a gambling license (you should see it at the bottom of the homepage), then you can be assured the site is safe and is being properly regulated. Should you find there’s anything suspicious or untoward about the bingo site, simply look elsewhere.

To whittle the huge choice down even further, a good idea is to look at the site’s promotional offers and bonuses. This is where the sites can get competitive; after all, they need to attract players. If you find a great welcome offer, be sure to look elsewhere because another site might offer a much better deal. Be sure to compare things like free spins, deposit bonuses and loyalty/VIP schemes. Also, have a look at the games available, otherwise you could end up signing up to a site only to find out it doesn’t offer the game you want to play. Many bingo sites offer a selection of casino games, while some focus solely on bingo.

Once you’ve found a good bingo site and have got signed up, head to the lobby. Here you’ll be able to see when the next games are due to start, what type they are, how much tickets cost, what prizes are available and how many players are taking part. The prize money usually increases the more players there are taking part, though sometimes you’ll find it’s a set amount. Once you’re in a bingo room, you’ll be able to buy tickets; as these are marked off automatically, you can buy many of them for a single game to increase your chances of winning, though of course this is a more expensive option. Sometimes there may be an upper limit of how many tickets a single player can purchase. The great thing about online bingo is that no input is required from players. You just sit back, relax and hope that you win!